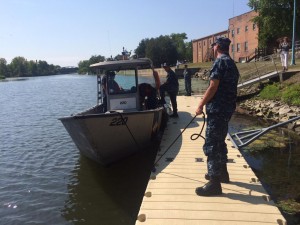 WHITEHALL--Seven members of the New York Naval Militia’s Military Emergency Boat Service (MEBS) based in Whitehall, were recognized as the Naval Militia’s most outstanding unit in 2015, during a Sept. 4 ceremony here.

The MEBS Detachment Whitehall was awarded the Naval Militia’s Josephthal Trophy by Rear Admiral Ten Eyck “Trip” Powell during a ceremony at the Skenesborough Museum.

The Josephthal Trophy, named for Rear Admiral Louis Josephthal, who commanded the Naval Militia from 1925 to 1929, and who bequeathed $10,000 in his will to set up a trophy fund, has been awarded to outstanding members of the Naval Militia since 1929.

The Whitehall MEBS Detachment was recognized for their hard work in training and in supporting the Coast Guard, local sheriff offices, and Border Patrol on Lake Champlain, Powell said.

The detachment, which operates a boat based in Whitehall, operates throughout the length of the lake and also on the Champlain Canal, which joins Lake Champlain in Whitehall.

“They cover a huge geographic area,” Powell said.” They train all over the lake. They have assisted the Border Patrol and the local sheriff’s department s and they even rescued a young woman in distress,” Powell said.

The detachment members have also become part of the community, developing relationships with the American Legion post, and the Skenesborough Museum, which tells the story of Whitehall’s early history, Powell said.

Whitehall was originally named Skenesborough, after the local landowner. After he sided with the British Crown during the Revolutionary War the town changed its name.

Whitehall claims to be the birthplace of the U.S. Navy because a fleet of gunboats which fought the British for control of Lake Champlain in October 1776 under the command of Benedict Arnold, was built there.

The winner of the Josephthal trophy is determined by a board of Naval Militia officers.

The members recognized on Sept 4 are:

Members of the Naval Militia use their federal military training to help the state of New York in times of need. Five percent of the member are retired military members who serve in state mission status only.

The Naval Militia operates a fleet of nine patrol boats which can support federal, state, and local agencies. Naval Militia members also serve in other capacities when required ranging from truck drivers to construction workers to nuclear power experts.