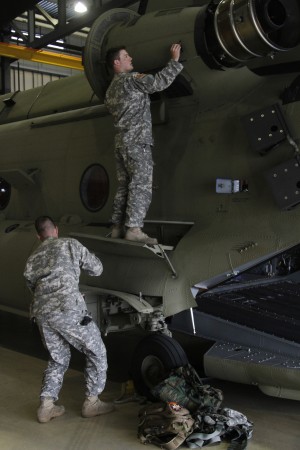 ROCHESTER �“ The weather may have rained on the CH-47 Chinook helicopter parade, but that didn’t stopped the Soldiers of B Company, 3rd Battalion, 126th Aviation Regiment from being focused on their training and keeping their skills sharp.

The Chinook crews were scheduled Saturday, Sept. 12 to conduct a training exercise with the New York Air National Guard’s 274th Air Support Operations Squadron’s joint terminal air controllers in which the helicopters would fly the Airmen to Seneca Army Depot in Romulus to carry out an air assault mission.

Instead, a steady, drizzling rain throughout the morning brought a low cloud ceiling with low visibility and forced B Company to cancel the mission. Sgt. Mike Landauer, a flight engineer with B Company, said the aviators consider many factors, including weather, before conducting a training exercise.

“Really, you’re going to err on the side of caution,” he said. “There’s no reason to go crash a $33 million helicopter if you don’t have to.” Another factor, he said, is aircraft availability. With a still brand-new fleet of Chinooks, Landauer said some of the aircraft are in phase, meaning they are out of service for inspection at certain intervals, such as after 100 or 200 hours of flight time.

“We strive to keep everything ready to go,” he said, noting another helicopter had an issue that was fixed that morning. “The two aircraft that were ready to fly today were ready to go.”

Despite the air assault training being scratched, Landauer said the B Company aviators trained all week through additional flight training periods. With some pilots fresh out of flight school and three brand-new crew chiefs, much of the training has involved helping the new crew chiefs learn standard operating procedures, airspace surveillance and the Chinook mission set.

Meanwhile, the pilots are studying up on maps and orienting themselves with how the area looks from the air. Landauer said the Chinook crews train for several different mission sets, such as air assault, troop insertion, sling load, and internal and external cargo. “That’s our bread and butter,” he said of cargo missions. “Obviously, this helicopter is designed around that.”

With B Company preparing for a possible deployment in two years, Landauer said the unit deployed to Kandahar, Afghanistan in 2012-13 in which it worked with Australian special forces to coordinate air support for ground missions.

He said the Chinooks would drop the special forces off a few kilometers from the target, while Apache gunships provided cover and Black Hawks situated snipers on high ground.

Though the aviators and the JTACs wouldn’t necessarily deploy together, Landauer used that scenario to illustrate why the units often train together. The JTACs often fly on Chinooks or Black Hawks while attached to special forces or Navy SEALs, for example, and B Company often carries such units on its helicopters.