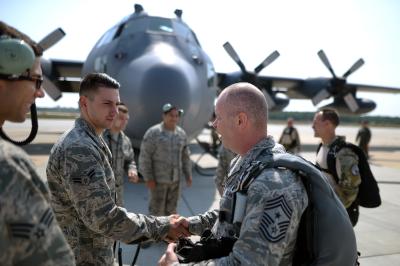 WESTHAMPTON BEACH, NY - Air National Guard Chief Master Sergeant James W. Hotaling speaks with aircraft maintainers shortly before conducting his final jump from a military aircraft over FS Gabreski ANG on September 2nd, 2015. During his visit with the 106th Rescue Wing, Hotaling met with junior and senior enlisted airmen to discuss their needs and any ongoing issues they may be facing. Hotaling is the eleventh Air National Guard Command Chief Master Sergeant. He represents the highest level of enlisted leadership and is responsible for matters influencing the health, morale and welfare of assigned enlisted personnel and their families. (New York Air National Guard / Staff Sgt. Christopher S Muncy / released)

WESTHAMPTON BEACH, NY - The Command Chief Master Sergeant of the Air National Guard completed his last jump and spoke with members of the 106th Rescue Wing during a three-day visit in September.

Chief Master Sgt. James W. Hotaling began his visit with an on-base tour and jump with the 102nd Rescue Squadron and 103rd Rescue Squadron, and ended his third day with enlisted personnel in a pair of town-hall format meetings. These meetings were held to discuss important issues Airmen face in the Guard, allowing Hotaling to answer Airmen’s question.

During his time with the wing, Hotaling emphasized the evolving responsibilities of the Air National Guard.

"Let me explain something to all of you," he said, "the Guard that you joined [prior to 9/11] no longer exists. Prior to 9/11, we were a strategic reserve; but that’s not today’s Air Guard. The new reality is we are now an operational reserve of the Air Force. Things have changed."

Hotaling was thankful for the opportunity to conduct his final jump from a military aircraft one last time before his retirement after nearly 28 years of service.

"Yesterday I did a jump with the [102nd Rescue Squadron and 103rd Rescue Squadron] here, and a big thanks to everyone who made that happen," Hotaling said. This was something that I really wanted to do and I will be forever thankful to everyone here."

During the lunch with selected junior Airmen, Hotaling spoke with Airman 1st Class Kelly Barnes, a distinguished honor graduate from the Air Force’s Fire Protection Academy and the first female member of the 106th Rescue Wing Fire Department. Barnes was presented with the Chief’s coin, one of only two Airmen to be coined during his visit, recognizing her for her outstanding performance in tech school and at the 106th Rescue Wing.

"It’s a great honor [to be coined,]" Barnes said "It makes me want to keep working hard and to keep excelling. It’s not just a random coin that you put somewhere and say ’oh, I got it.’ You try to live up to it."