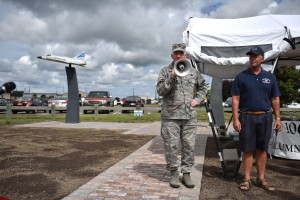 New York Air National Guard Col. Tom Owens, commander of the 106th Rescue Wing, speaks to wing members during a ceremony opening the wing Heritage Park at F.S. Gabreski Air National Guard Base in Westhampton Beach, N.Y. on Saturday, Sept. 12. Over his right should is a model of an F-102 Delta Dagger like those the wing flew from 1972 to 1975 when it was an fighter interceptor wing. (U.S. Air National Guard photo by Tech. Sgt. Christopher S. Muncy/Released)

F.S. GABRESKI AIR NATIONAL GUARD BASE, WESTHAMPTON BEACH, N.Y.--A project ten years in the making that tells the story of the 106th Rescue Wing was completed on Sept. 12, 2015, as the 106 RQW Pride and Heritage Park was dedicated with a ribbon cutting.

Here Airmen can see models of the aircraft the New York Air National Guard unit has flown today and in the past and today.

A model F-102 Delta Dagger recalls the years when fighters designed to shoot down Russian bombers flew from the base. Models of the HH-60 Pavehawk rescue helicopter and the HC-130 rescue version of the Hercules note the wings mission today as a rescue wing.

Heritage bricks engraved with the names of unit members and New York Air National Guard members, both past and present, line the walkway leading to the park. The 106th Rescue Wing Alumni Association supplies bricks for purchase and at the time of the park dedication, 112 imprinted bricks were in place.

“Having a heritage brick allows former and current members, and supporters of the wing to be part of the base well into the future,” explained retired Colonel Robert Landsiedel, former vice wing commander, here, and president of the Alumni Association.

Funds from the sale of heritage bricks pay for annual scholarships awarded to wing members in college, and their family members graduating from high school.

According to Air Force Instruction 84-103, “United States Air Force Heritage Program,” the United States Air Force is fully committed to preservation of its history. Heritage activities form a vital part of the framework to recruit, train and sustain the force, providing education and culture of the armed forces to military personnel and the public. The Alumni Association looks to uphold the Air Force tradition of preservation with the opening of the park.

“The Alumni Association embodies a connection to past members, tying them to current members, helping to develop future airmen, and that’s a wonderful thing,” said Col. Thomas J. Owens II, commander of the 106th Rescue Wing.

Airman 1st Class Conrad Tamberino, a member of the 106th Civil Engineering Squadron, here, worked on the summer-long project of the park installation. He plans to purchase a brick in the name of his father and former wing member, Senior Master Sergeant Cary Tamberino, New York Air National Guard, retired. The younger Tamberino had a daughter due within a week of the opening of the park.

“It would be awesome when she’s old enough to show her my father’s brick, to give her that sense of pride that I had toward my father and the Air Force,” said Tamberino of his soon-to-be-born daughter.

“The bricks represent individuals and show the hard work and dedication of every individual, past and present, holding up the planes in support of the wing mission.”

Chief Master Sergeant Vincent Fondacaro, 106the Rescue Wing Civil Engineering Squadron, appointed squadron member Staff Sergeant Edwin Laporte as the project manager, who did not know how to install pavers until he took on the job. Laporte said he felt gratification in doing the work and being part of something that means so much to people.

“This is a little bit more intimate for some people,” Laporte said he realized, upon reading some bricks and seeing they were dedicated to deceased loved ones. “I’m happy I did it…the fact that it’s meant for a higher purpose, I feel even better that it was done.”

Tamberino, Chan, and Laporte commended the civilian state workers of the squadron who, they say, played a large role in the completion of the Pride and Heritage Park.

The Airmen described the work as laborious and challenging, compounded by sweltering summer temperatures.

According to the Airmen, their civilian counterparts never wavered in their commitment to ensure proper care and workmanship was applied to the project. According to Fondacaro, a brick will soon be dedicated to the state workers of the squadron to show appreciation for their ongoing part in the legacy of the wing.

According to Fondacaro, the park is an evolving project. Landscaping will be used to separate the park from the adjacent lot and models of future airframes will be added as they become part of the wing mission and history.

The 106 RQW Alumni Association will continue to furnish bricks available for purchase by members for themselves; their families; fellow members; as well as local organizations and businesses that support the 106th Rescue Wing and mission. Bricks will be added to the park periodically.