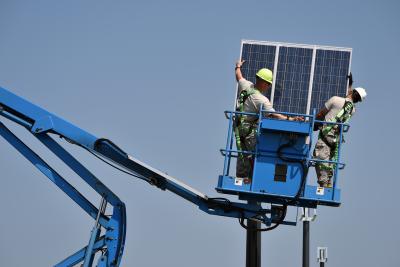 WESTHAMPTON BEACH--Even after the sun sets, it continues to brighten the night at the 106th Rescue Wing, here, with newly installed solar-powered lights in and around the base. The 106th Rescue Wing Civil Engineering Squadron (CE) took on a do-it-yourself project recently to replace antiquated lighting that will result in a savings of an estimated $5,000, according to CE, in annual electricity cost, while providing brighter lighting, security and safety.

Upon a complete overhaul of the base electrical network in 2012, taking it from overhead wiring to an underground system, poles with streetlights were no longer in place. Base workers soon recognized the need for a lighting solution in critical areas. A lighting solution compliant with Unified Facilities Criteria (UFC 3-530-01) was developed.

Airman First Class Owen Murphy, an electrician of the Civil Engineering Squadron, was tasked with researching lighting options. He looked to the internet to shed light on the issue and soon found more efficient alternatives that would save money and conserve energy. Chief Master Sergeant Vincent Fondacaro, of the Civil Engineering Squadron, assessed the purchase cost of equipment to date to be $41,000. Installation of the purchase would have been an additional $25,000 if the work had been done by outside contractors, according to him. Instead, squadron members, with their backgrounds in electrical and heavy machinery work, were able to install the equipment for less than $2,000.

"We can do anything with the right equipment and the right people on the job," said MSgt John Gentile, also of the Civil Engineering Squadron.

The squadron replaced old electrical light poles interconnected by overhead power lines with solar-powered light poles. The new poles, arranged in and around high traffic areas and buildings, are individually self-sufficient, and require new battery packs about every five years, according to Gentile.

In addition to the solar light poles, Civil Engineering found options to save money and energy in other areas around the installation. Wall packs, powerful light fixtures installed at outdoor locations of buildings, now use light-emitting diode (LEDs) lamps in place of high-intensity discharge (HID) lamps. A lumen is a measurement of the brightness of light.

According to -www.energy.gov -- the lumens per watt provided by an LED light declines gradually and over a long period of time. A lumen output of an equivalent HID lamp lessens quicker than LED and must be repeatedly replaced during the same period of operation. The vehicle maintenance bay and aerospace ground equipment bay here have 24 high bay fixtures. High bay lighting is designed for use in maintenance, warehouses, hangars, and other large indoor areas. The maintenance bay HID lamps were replaced with LEDs and translates to 2 and 1/2 times more lifespan per bulb; at one-third the cost; and 4 times more light output, according to the LED manufacturer website. Gradually much of the base will be changed to LED lighting, but addressing critical areas for safety and security was priority. The initial project to update lighting was finished in just under two months and in time for October, Energy Action Month.

President Obama proclaimed the month with Executive Order 13693, Planning for Federal Sustainability in the Next Decade. The order is to maintain Federal leadership in sustainability and greenhouse gas emission reductions, and reduce taxpayer energy costs. Murphy, pleased with the resulting efficiency and cost savings of the new lighting, recognized it was a joint effort amongst all members of his squadron, both civilian and military. "It’s nice to be part of a conservation project," Murphy said. "Money isn’t just saved in the short-term - money is saved in the long-term because the lights last so long...It’s money that can be put to better use instead of just burning it."