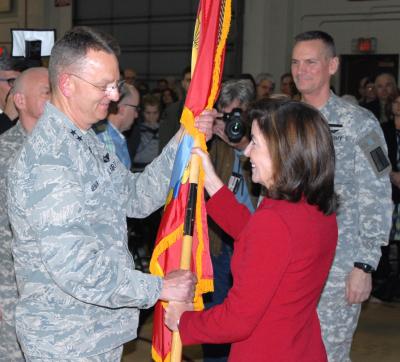 German, an Oneonta resident, praised the men and women of the New York National Guard and pledged to do his best for them. He also thanked Governor Andrew M. Cuomo for appointing him to the position. “It’s the people: the sergeants, the NCOs and the officers are all what makes this organization great,” German said following his assumption of command of the New York National Guard.

“I look forward to leading you because it is a tremendous honor,” he told his audience of invited guests and National Guard members.

German also praised his predecessor, Major General Patrick Murphy, a Clifton Park resident, who will serve as the Director of Strategic Plans, Policy and International Affairs at the National Guard Bureau.

Lt. Gov. Katy Hochul, acting as Gov. Andrew M. Cuomo’s representative, presided over the traditional exchange of the colors, which signified the passing of authority for the New York National Guard from Murphy to German.

In her remarks, Hochul commended Murphy for his six years of service as Adjutant General of New York. The event was about saying goodbye to one leader and welcoming another, Hochul said, adding that German was an exceptional leader who had proven himself in the past.

She also thanked the men and women of the New York National Guard for their service during state emergencies, as well as when deployed overseas.

“Thank you for all you do. We are able to sleep safely in our beds because of what you do here at home and abroad,” she said.

The Adjutant General is also responsible for the New York Naval Militia, a force of 2,900 personnel, the bulk of whom are currently serving members of the Navy, Marine Corps and Coast Guard Reserve who also volunteer to serve on state duty during emergencies.

Another 600 people serve as volunteers in the New York Guard, a state force that assists the National Guard during emergencies.

The Adjutant General is simultaneously the commissioner of the New York State Division of Military and Naval Affairs and a federally recognized military officer in the Army or Air Force.

Murphy thanked Gov. Cuomo for his confidence in him and for the opportunity to serve as Adjutant General. Murphy also said it was the people of the New York National Guard who were its finest asset.

“The people are the best part of this job,” Murphy said. After six years it is time for him to move on. “Change is good for an organization,” Murphy said.

Gov. Cuomo had several good candidates to replace him as Adjutant General, Murphy said, but he picked German because he is the best man for the job.

“He will do an incredible job as adjutant General,” Murphy said. “I am proud to be able to say we served together.”

The 109th Airlift Wing, based at Stratton Air National Guard Base in Scotia, flies the LC-130 aircraft, the only ski-equipped aircraft in the U.S. military. The wing provides support to the National Science Foundation’s research efforts in Antarctica and Greenland.

German also served in the Office of the Secretary of Defense, Reserve Affairs as the Department of Defense Liaison Officer to the National Science Foundation. He recently completed a 30-day assignment as Acting Director of the Air National Guard.

He is a master navigator with over 4,900 flying hours and in the C-130 Hercules and other aircraft.

German holds a degree from SUNY Oneonta and is a graduate of the United States Naval War College and the Senior Reserve Component Officer Course, Carlisle Barracks, Pennsylvania.

German lives in Oneonta with his wife Diana. They have four children, Josh, Ben, Zach and Bekah.

Joshua German and Ben German are also both members of the New York Air National Guard.