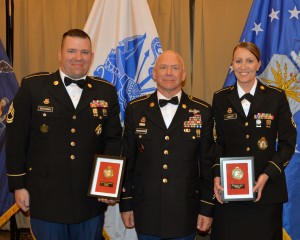 U.S. Representative Chris Gibson, a Kinderhook resident and former Army Colonel, was also recognized with an association award for his support to National Guard personnel.

The real stars of the evening, though, Gibson told the 135 people attending the event, were the Soldiers and Airmen being honored for their accomplishments.

National Guard members recognized at the dinner included: . New York Army National Guard Spc. Qian Han, from the 1156th Engineer Company, who was recognized for her selection as the top junior enlisted Soldier for 2016;

. New York Army National Guard Staff Sgt. Garrett Cummings, the 106th Regional Training Institute, Peekskill, who was honored for being selected as the top NCO for 2016:

Assemblyman James Tedisco, from Schenectady, received the association’s state Patriot award. According to Wicks, Assemblyman Tedisco led the way for the passage of the three New York State Patriot Plans between 2003 and 2006 that contained a host of benefits for members of the New York National Guard and their families, was an early supporter of the New York state tuition assistance program for members of the National Guard that became law in 1996 and was instrumental in introducing additional legislative initiatives that include property tax exemptions for Guard members as well as state tax credits for employers that hire Guard members.

"Assemblyman Tedisco has been a long-time supporter of the National Guard and our association’s initiatives to provide benefits our members deserve," Wicks said.

A new education award-the TJ Lobraico Memorial Scholarship, named in honor of a 105th Airlift Wing Airman killed in action in Afghanistan in 2013-was presented to Nathaniel Palmer.

The Enlisted Association is dedicated to promoting the status, welfare, and professionalism of all members of our State’s organized militia.