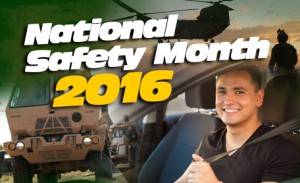 Each June, the Army observes National Safety Month in conjunction with public and private organizations across the United States. This year’s campaign focuses on the significance of safety in four key areas: off-duty driving, civilian injury prevention, and ground and aviation operations. New campaign materials, including informational feature articles, posters and other media, along with links to some of the U.S. Army Combat Readiness Center’s most popular risk management tools, are now available for download at:

Please reproduce and distribute throughout your formations as needed.

Remember, risk does not keep a calendar, so use National Safety Month to strengthen your safety programs now and into the future. Army Safe is Army Strong!

Boating and Drinking - A Dangerous Combo

You would never consider drinking and driving, but do you feel the same about drinking and boating? If you’re ready to enjoy warmer weather from behind the stern, throwing your beer cooler in along with your skis and fishing gear isn’t a good idea. In fact, it might get you killed. Drinking is the leading known contributing factor in fatal boating accidents, comprising approximately 21 percent of deaths and rising, according to the U.S. Coast Guard.

“The intensity of the sun and how long you’re outside can amplify the effects of alcohol, especially when you factor in the motion, sound and vibrations of the marine environment,” Russell said. “It’s not the same as drinking while sitting in a chair at home near the air conditioner.”

In 2014, the Coast Guard reported 4,064 accidents that involved 610 deaths, nearly 2,700 injuries and approximately $39 million in property damage attributed to recreational boating mishaps. In addition to staying sober, boaters of all ages should take the simple yet critical step of wearing a personal flotation device.

“Where cause of death is known in reported boating accidents, the Coast Guard reports 78 percent of victims drowned and 84 percent were not wearing a life jacket,” said Joan Blackwell, USACRC Ground Directorate. “When you’re in a boat, wear your flotation device because it could save your life.”

Overcorrecting and Rollovers - From Bad to Worse

Driving off the road is bad enough, but overcorrecting only makes it worse.

“Overcorrecting is often indicative of running off the road and overreacting by jerking the wheel to get the vehicle back on the roadway,” said Walt Beckman, Driving Directorate, U.S. Army Combat Readiness Center. “It’s usually due to inattentiveness, fatigue, or failing to maintain contact with the road in a curve.” Motorists who exit the roadway and then overcorrect create a loss of control event, which is a small but deadly component of the Army’s overall accident numbers.

According to data available from the USACRC for fiscal 2015, loss of control was cited as a cause in seven fatal accidents, with speed and improperly entering a curve contributing to most.

“Those loss of control accidents accounted for roughly 15 percent of the 46 PMV fatalities recorded in fiscal 2015,” Beckman explained. “Loss of control in almost all cases is associated with another causal factor such as speed. In contrast, 17 of those 46 accidents, or 37 percent, were solely attributed to indiscipline such as speed, failure to wear seat belts or alcohol use.” Overcorrecting often leads to rollovers, which are the deadliest of vehicle crashes.

According to the National Highway Traffic Safety Administration, rollovers comprise only a fraction of total accidents but cause a disproportionate number of fatalities. For example, of the 9 million vehicle accidents reported in the United States during 2010, 35 percent of fatalities occurred during rollovers, which represented only 2.1 percent of total accidents. Nearly 70 percent of those victims were not wearing seat belts. Soldiers can best protect themselves from rollover events by following established rules of the road.

“It’s as easy as maintaining the speed limit, always wearing seat belts, never drinking and driving, eliminating distractions and slowing down when the weather deteriorates,” Beckman said. “Momentary lapses in judgment are usually what lead to the fatalities we see.”