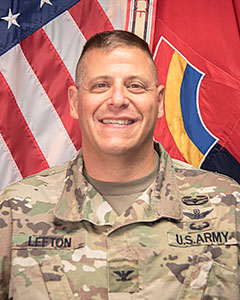 LTC Jason Lefton earned his commission in June 1996 from Marion Military Institute and joined the New York Army National Guard in August 1996. His career began as a Field Artillery Officer in the 1/156 FA BN. After completing FA OBC at FT Sill, Oklahoma, LTC Lefton first served as Fire Direction Officer and then as Support Platoon Leader. While serving as Support Platoon Leader, he completed Air Assault School and supported the HIARNG during a JRTC rotation. LTC Lefton also served as a TAC Officer and Instructor for NY State OCS at the RTI from 1998-2000.

LTC Lefton joined Army Aviation November 2000 and attended IERW at FT Rucker, Alabama in January 2001. After completing IERW and UH-60 AQC, he returned to Albany and joined 3/142 AVN. In May 2002, LTC Lefton deployed to Bosnia and Herzegovina in support of SFOR 12 as an LNO for MND Southeast and also served as the Task Force Battle Captain. Upon his return, LTC Lefton joined 1/142 AVIM BN, completed UH-1 AQC and served as the S2/S3 for 3 years including a deployment in support of OIF II. He completed the Captain Career Course November 2005 and the CH-47 AQC March 2006. LTC Lefton then served as the DET CDR for 3-126 HH preparing the Unit for Afghanistan. He then transferred to 3-142 AHB and served 2 years as the S1 and 2 years as the BN XO during OIF 8-10. He served as the B Co 642 AVIM Company Commander from November 2009 until March of 2012. He served as Commander of AASF#1 NY from December 2009 to February 2013. He served as the 42d CAB assistant S3 and deployed to OEF-KU serving as the 42d CAB S3 and the 42d CAB XO in support of USARCENT.

He most recently served as the 42d CAB XO and fulltime AO. He has completed the Aviation Maintenance Officer Course and is a graduate of both CGSC-ILE-CC and the Advanced Operations & War fighting Course. He recently earned an MBA from the University Of Phoenix after winning a scholarship from NGAUS. He completed his Bachelor’s degree in Rhetoric and Communications at the State University of New York at Albany and played on the University Rugby Club. His father is a retired Navy Corpsman; his twin brother is also a Major in the 42d Infantry DIV of the NYARNG, another brother is a Company Commander in the USAR and one is a reserve Naval Nuclear Officer. He has civilian work experience as a fully registered representative in the financial services industry. He holds a Commercial Helicopter Pilot license and Single Engine Airplane license.

LTC Lefton is married to the former Heather Zimmerman and lives in Niskayuna, NY. They have two sons named Mack Levi Lefton and Seth Gage Lefton.