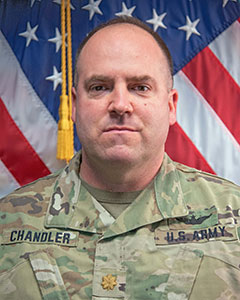 Major Henry T. Chandler, a native of Portland, OR, enlisted in the Montana Army National Guard in 2001 as an Infantryman. In 2003 MAJ Chandler enrolled in the Reserve Officer Training Corp and received his commission in 2005 as a graduate of Montana State University in Bozeman, MT, where he earned a Bachelor of Science degree in Business Management.

Following his deployment, MAJ Chandler transferred to the New York Army National Guard and was assigned to 3-142nd Assault Helicopter Battalion from January 2010 until January 2018. During this time, he served as the Battalion S1, Bravo Company Commander, and Battalion S3.

In January 2018, MAJ Chandler was assigned to Headquarters, 42d Combat Aviation Brigade where he served as the Assistant S3 while completing the Command and General Staff Officer Course and the Advanced Operations Course.

MAJ Chandler is married to Ashley Erdmann of Sebastopol, CA. They have one child, Kai Chandler.