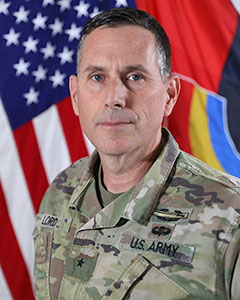 Brigadier General Nathan Lord is the deputy commander for support for the 42nd Division.

Lord was promoted to the rank of brigadier general by Major General Thomas Spencer, the commander of the 42nd Infantry Division.

He then served as the Brigade Commander for the 86th Infantry Brigade Combat Team from August 2017 to July 2020. His most recent assignment was as the Vermont Army National Guard Chief of Staff from July 2020.

Lord is a veteran of Operation Enduring Freedom serving in Afghanistan as the Battalion Training Team Chief from 2003-2004.

His awards and decorations include among others the Bronze Star medal, Meritorious Service Medal, Army Commendation Medal, Army Achievement medal, the Parachutist Badge, the Combat Infantryman's Badge, and the Ram's Head Device.

Lord grew up on the coast of Maine and currently lives in Waterbury, Vermont with his wife Sarah, son Sam, and daughter Elizabeth.