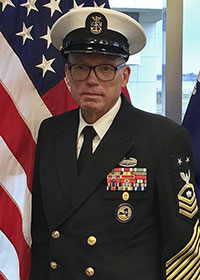 Master Chief Glenn L. Niemitalo was born and raised in the Albany NY area and is a 1974 graduate of Columbia High School in East Greenbush, NY. He enlisted in the United States Navy on October the 2nd 1975. Following bootcamp, he was trained as an Aviation Electricians Mate and was assigned to Anti-Submarine Warfare Patrol Squadron VP-11, home ported in Brunswick Maine. During his active service he was advanced up to the rank of Petty Officer 2nd Class, and performed deployments with VP-11 to Spain, Portugal, Bermuda, Greece, Puerto Rico and numerous countries in Central and South America.

In 1979, he was released from active duty and transferred to the Naval Reserve in Albany NY, where he was assigned to Mobile Mine Assembly Group 302, cross-rated to Mineman, and was advanced to Petty Officer 1st Class. After active-duty, he attended Hudson Valley Community College in Troy NY and Union College in Schenectady NY. He received an Electrical Engineering degree from Union College and is a Licensed NYS Professional Engineer.

Between 1979 and 2003, as a Mineman in the US Naval Reserve Albany NY and Pittsburgh PA, Mobile Mine Assembly Units, he performed duties with active-duty units in Italy, Japan, and throughout the U.S.

From 2003 to 2005 he served as the Reserve Command Master Chief at the Naval Reserve Center in Albany NY.

In June 2009, he was recalled to active duty in support of Operation Enduring Freedom. He completed Army Advanced Combat Training at Fort Dix NJ and was deployed to Afghanistan with Provincial Reconstruction Team Paktika at Forward Operating Base FOB Sharana. In 2010 he was transferred to FOB Chapman in Eastern Afghanistan and served as the Command Master Chief with Provincial Reconstruction Team Khost which received the Department of the Army Valorous Unit Award.

Following release from active-duty mobilization he returned to Naval Reserve duty at the Naval Operational Support Center Schenectady, and retired from the US Navy in 2016 after 41 years of service.

He affiliated with the NYS Naval Militia in 1980 and has served on numerous NYS Active Duty Emergency and training missions. In January of 2020, he assumed the duties as the Naval Militia, Military Emergency Boat Service (MEBS), Readiness Officer. In April of 2020 he was selected as the Force Master Chief of the New York Naval Militia.

Master Chief and his wife Kathleen reside in Castleton, NY where they raised their children Lee, Sharon, Danielle and Trisha.

Personal Identifying Information (PII) should be transmitted only by encrypted email or through the U.S. Postal Service. NYS Division of Military and Naval Affairs and the NY Naval Militia are not responsible for pre-delivery loss, disclosure or compromise of PII sent by unencrypted email, non-secure media, or document delivery services other than the U.S. Postal Service.
© NYS DMNA: NY Naval Militia: Force Master Chief
URL: https://dmna.ny.gov/nynm/?id=cmc
Page Last Modified: 19 Apr 21