April 15, 2021 | 1:19 pm COVID-19 Updates
COVID-19 is still spreading, even as the vaccine is here. Wear a mask, social distance and stay up to date on New York State's vaccination program.
Get the Facts 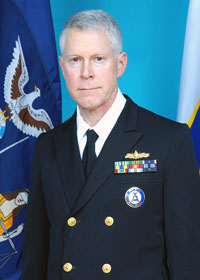 Rear Admiral Warren Smith, a native of Princeton, New Jersey, earned Bachelor's and Master's degrees in Architecture from Yale University. He is a registered architect, licensed to practice in New York and New Jersey. He serves on the Dutchess County Planning Board, is President of the Board of Directors of Hudson River Heritage, and is a member of the American Institute of Architects.

Smith was commissioned in the Navy in March 1981. Rear Admiral Smith's initial assignment was to the guided-missile destroyer USS Towers (DDG-9), forward deployed and home ported in Yokosuka, Japan.

On October 18, 2019, Rear Admiral Smith was appointed to the position of Commander for the New York Naval Militia.

Personal Identifying Information (PII) should be transmitted only by encrypted email or through the U.S. Postal Service. NYS Division of Military and Naval Affairs and the NY Naval Militia are not responsible for pre-delivery loss, disclosure or compromise of PII sent by unencrypted email, non-secure media, or document delivery services other than the U.S. Postal Service.
© NYS DMNA: NY Naval Militia: Commander
URL: https://dmna.ny.gov/nynm/?id=commander
Page Last Modified: 22 Oct 19