This exhibition (New York State Military Museum, Through June, 2006) commemorates the 140th anniversary of the Appomattox Campaign with five conserved battle flags carried by New York State volunteer regiments that participated in the Civil War’s final campaign. From the first engagement near Lewis’s Farm to the culminating battle at Appomattox Court House, New Yorkers accounted for over 30% of the total Union losses. This ehibit honors all the New Yorkers who participated in the campaign and presents the preserved tangible reminders of their sacrifice. 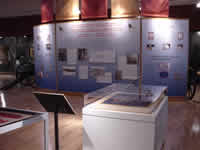 The exhibit with the 15th Cavalry standard in the foreground 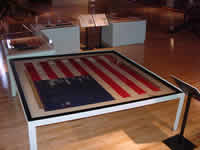 The five flags included in the exhibit are: