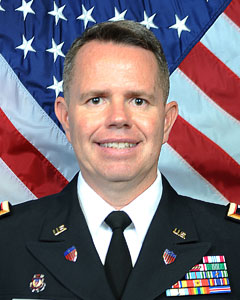 Colonel Steve Rowe is originally from Buffalo, New York. He holds a Bachelor of Science from the State University of New York (SUNY) at Brockport, Brockport NY; a Master of Science in Organizational Communication and Development from Canisius College, Buffalo, NY; and a Masters in Strategic Studies from the United States Army War College, Carlisle, PA.

Colonel Rowe is a 1994 graduate of the SUNY Brockport ROTC Program where he received his commission as an active duty Army Officer. For the past 26 years he has served in an active duty status in a myriad of command and staff positions both in the Active Component and National Guard to include his current position effective May 2019 as the Chief of Staff for the New York Army National Guard and the following past leadership positions of United States Property and Fiscal Officer for the State of New York, Director of Military Personnel/G1, Recruiting and Retention Battalion Commander, Executive Officer to The Adjutant General, Deputy Director of Military Personnel, Regional Recruiting Commander, Officer Strength Manager, Assistant Professor of Military Science - Canisius College, USMEPCOM Operations Officer, and brigade S1/personnel officer.

Colonel Rowe resides in Clifton Park, NY with his wife of 26 years, and two children.