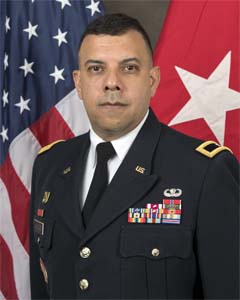 Brigadier General John Andonie is a graduate of the United States Military Academy at West Point who was commissioned as an armor officer in 1989.

Andonie was first assigned to the 194th Separate Armored Brigade at Fort Knox, Kentucky where he served in a number of basic officer positions. In 1995 he was assigned to the 11 Armored Cavalry Regiment at Fort Irwin, California where he served as a regimental and squadron staff officer. He also served as Commander of Troop a, 1st Squadron 11 Armored Cavalry Regiment.

The 11 Armored Cavalry Regiment serves as the Opposing Force or OPFOR for U.S. Army and Marine Corp armored and mechanized units training at the Fort Irwin' National Training Center.

In 1998 Andonie was assigned as Assistant Professor of Military Science at Siena College in Loudonville. He served in that position until 2000 when he joined the New York Army National Guard's 42nd Infantry Division.

Andonie holds a Bachelor of Science degree in history from the United States Military Academy and a masters of business from Rensselaer Polytechnic Institute and he is a graduate of the United States Army War College.

Andonie and his wife Kathleen have two daughters, Rachel and Elizabeth.