While visiting the Adirondack Park or North Country region of New York State, it is not uncommon to see or hear military aircraft traveling to or from training areas, or conducting training in and around the park. If you have a question or concern about military flights in the Adirondacks, you can contact the 174th Attack Wing Public Affairs Office in the following ways:

Aircraft from the Vermont and Massachusetts Air National Guards do regularly operate over northern New York. 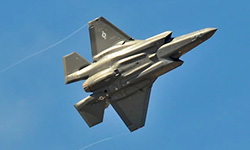 The 158th Fighter Wing of the Vermont Air National Guard, based at Burlington Air National Guard Base, operates the F-35 Lighting II stealth fighter that is designed to conduct both air superiority and ground attack missions.

Questions about the wing’s operations can be referred to the Vermont National Guard Public Affairs Office at 802-660-5379 extension 3 and then 1 for “questions, comments and concerns” 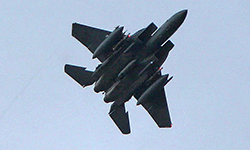 The following information may help you to better understand military flight operations in the Adirondack Park:

Air National Guard and Air Force pilots need to train consistently in order to effectively conduct air defense and ground attack missions. Pilots need to develop skills in air-to-air combat as well as the techniques involved in approaching a target at lower levels and then popping up to conduct an air to ground attack.

Aircraft from throughout the Northeast use an air-to-ground range at Fort Drum, N.Y., for this type of training and often times fly over the Adirondacks and North Country as they make their approaches. Low-level approaches negate enemy radar and anti-aircraft weapons.

Military aircraft cross the airspace over the Adirondacks and North Country using Military Training Routes. These are aerial corridors and are the result of a joint venture between the Federal Aviation Administration and the Department of Defense to provide for high-speed, low-altitude military activities.

Training in aerial combat normally takes place at higher altitudes. You may hear the aircraft but not see them.

The skills exercised here at home can save American lives overseas.