January 21, 2021 | 1:30 pm COVID-19 Updates
COVID-19 is still spreading, even as the vaccine is here. Wear a mask, social distance and stay up to date on New York State's vaccination program.
Get the Facts 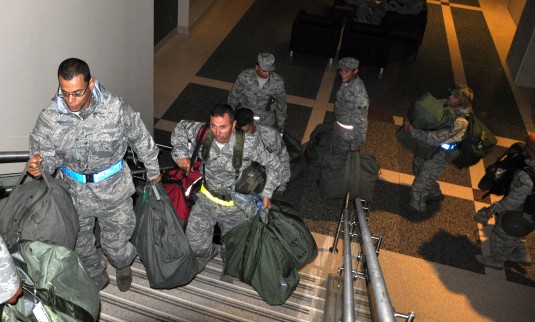 FARMINGDALE, N.Y. -- New York Air National Guard personnel arrive at the Farmingdale Armed Forces Reserve Center here on Aug. 28 to become part of Task Force Long Island, which is continuing to assist Nassau and Suffolk county civil authorities with clean up and other emergency response efforts in the wake of Hurricane Irene.

Task Force Long Island is part of the nearly 2,000 Soldiers and airmen New York Governor Andrew Cuomo mobilized in response to the storm, which caused deaths and destruction in other states. Soldiers and Airmen also deployed to New York City and the Hudson Valley to assist civil authorities there.

Task Force Long Island’s advanced party deployed to the Farmingdale Armed Forces Reserve Center ahead of the storm on Aug. 27, and with the addition of its reserve on Aug. 28, the task force has now grown to about 450 Soldiers and Airmen, said Maj. Michael Fowler, the task force operations officer.

Task force members have been helping civil authorities in Nassau and Suffolk counties with a variety of operations, he explained, including assessing damages to roadways to determine where emergency efforts are needed, and using chainsaws to clear downed trees from roads.

The storm also created areas of standing water and damaged traffic lights, Fowler said. Task force members are using Humvees -- which have higher axles -- to move firefighters and paramedics through these inaccessible areas, and providing extra transportation to police agencies, which are using patrol cars to control intersections, he explained.

Task Force Long Island is made up of Soldiers and Airmen from National Guard units across the state, including military police units, Fowler stressed. Fowler, of Rochester, is also a Monroe County Sheriff.

"We’re providing them with resources to accomplish their missions, and putting extra sets of eyes on the roads," Fowler said. "This is a perfect mission for MPs." The task force also has Soldiers and airmen standing by to help with medical evacuations, he added.

NY National Guard In the News

CBS 6 -- Wed, 20 Jan 2021 Hundreds from New York among National Guard on inauguration duty CAPITAL REGION, NY (WRGB) The country prides itself on a peaceful transition of power and in a year of division and unrest, the National Guard was at the ready to ensure that happened Wednesday.... (more)

NationalGuard.mil -- Thu, 14 Jan 2021 NYNG Soldier aids stranded family during holiday travels BUFFALO, N.Y. A New York Army National Guard Soldier on duty at Buffalo International Airport the day after Christmas went above and beyond the call of duty to help a stranded passenger and... (more)